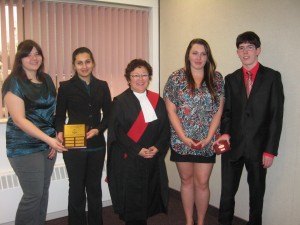 A Moot Court Competition was run on Saturday April 14 at Dryden Court.  The event was run by the Kenora District Law Association, and was sponsored by Law Firms “Hook Seller & Lundin”, and “McAuley and Partners.”   The event was timed to coincide with the Ontario Bar Association “Law Day” celebrations.  Law Day is a week long event, designed to educate students and the public about the Justice System.

Each student plays the part of a “lawyer”, who has to give a statement, either the opening statement or closing statement, and had to conduct a direct examination and a cross-examination.  The trial was based on a fact pattern, which can be found at this link:  http://www.oba.org/en/pdf/SSMT_2012_Case_EN_Final.pdf

Students played all the roles involved including witnesses and jurors.

The Trial was presided over by Justice Jennifer Hoshizaki, a judge of the Ontario Court of Justice.

Teachers John MacRae from Queen Elizabeth and Cindy Palermo-Savage, from Dryden High, spent a great deal of time getting the students organized, and helping their teams prepare for the event.

When the trial was completed, the Jury found the accused guilty.

The winning team was selected by the Judge and two lawyers, Bill Bonham and Mark Schaub.  Justice Hoshizaki commented that the teams did an excellent job presenting their cases.  The best individual speakers were Queen Elizabeth students Paige Wills and John Comhaire.  Ultimately, however, the Dryden team took the trophy, winning the competition, as they did a better job linking the evidence to the facts of the case. Dryden High School will display the trophy for the coming year.

Peter Keen commented that “The students did remarkably well.  They obviously put a lot of time into preparing their cases, and looked and behaved like lawyers.  Their public speaking skills were excellent.”